Shortly after I reached the age of 21, (quite some time ago) I moved to CO – a state known for skiing, mountains and beer. Until that point, Budweiser, Coors and Miller High Life (the proverbial Champaign of beers) was all I knew of beer. I didn’t much care what it was when I was 21; I was just excited to drink anything legally. But, after I moved Fort Collins, CO, home to New Belgium and O’Dell’s, I experienced the complexity and adventure of craft beer and the Champaign of Beers kind of lost its celebratory appeal.

Since then, I’ve moved a few more times. Each time, I worried that I may not be able to get the beer I had grown so fond of in CO. Fortunately, the craft beer scene has been rapidly expanding, and so I was able to get New Belgium beers as well as a variety of other microbrew delights in my new respective cities.

A year ago, we moved to a relatively small city of 30,000 in central TN for my husband’s job. Having spent most of my life in the West and in relatively large cities, I was completely ignorant to what living in Cookeville, TN (part of the Bible belt) would be like. I worried, again, that the only beer that would be available would be the High Life.

But, I need to jump off my “I lived in CO so I know all about beer” high horse, because apparently, I don’t know jack. I was pleasantly surprised to find a community of craft beer enthusiasts in Cookeville, TN, as well as some outstanding breweries. I have been learning a lot more than I ever imagined I would about beer since I got here.

Hix Farm Brewery is one of three nano-breweries that have opened in Cookeville TN in the past 2 years.

There was so much I initially enjoyed about my experience at Hix Farm Brewery – the welcoming atmosphere, the rustic décor and, of course, the beer. 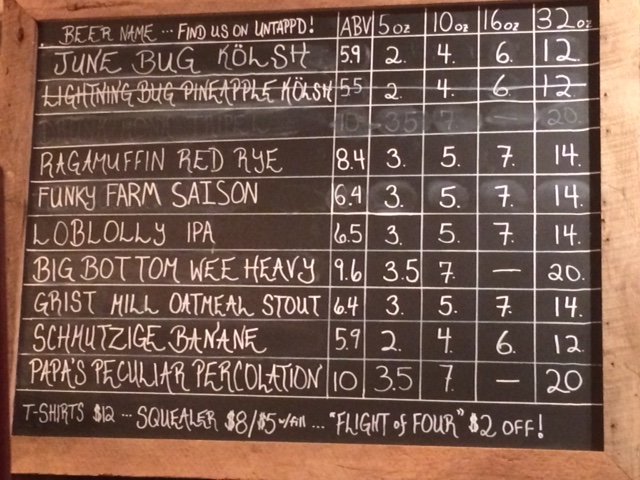 Unlike my experience with most coffee stouts, I didn’t detect subtle notes of coffee – it was more like a coffee bonanza smacked my lazy senses. It was awesome. I could have easily enjoyed 16oz of it, but I know my limit and at 10% ABV, I couldn’t do that, try other beers, and walk out of the Tap Room without drunk texting everyone on my contact list, so I stuck to the smaller tasters.

I enjoyed all of them. Especially the Schmutzige Banane (which translates to Dirty Banana in English). But, if I had to choose one that stood out to me the most, it would be the Papa’s Peculiar Percolation. The brewery teamed up with the local TN coffee roasters, Broast Coffee, to produce the stout. In fact, Hix Farm Brewery uses all locally grown and sourced ingredients, a concept that has been described as the beer equivalent of farm-to-table. I love this concept because not only are they supporting local businesses and using fresher ingredients, they are producing a product that is unique to the region at its very core. There is a lot of good stuff coming from Hix Farm Brewery. With their taps constantly changing, I’m looking forward to finding out what’s next.

Start a Blog at WordPress.com.